Welcome to the Forum!

It’s good to have you here! Feel free to share anything - stories, ideas, pictures or whatever is on your mind. Here you can start discussions, connect with members, reply to comments, and more. 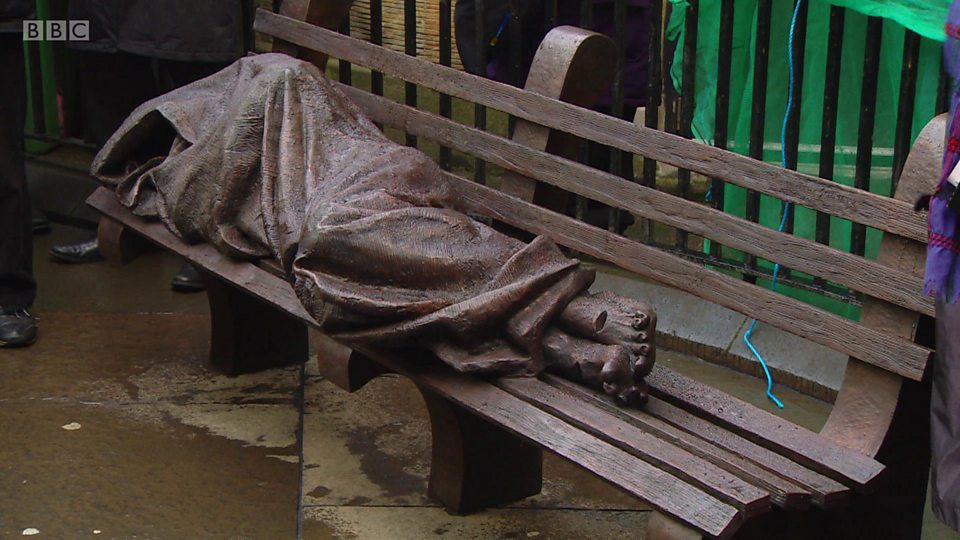 A sculpture depicting Jesus as a homeless man sleeping on a bench has been installed in Glasgow city centre.

Castings of the life-size statue have been placed in cities worldwide since 2013, although some churches have refused to display it.

Scottish artist Peter Howson has made a painting of a homeless Jesus that will be shown alongside the statue.

The world-famous sculpture, created by Canadian sculptor Timothy Schmalz, has been placed at Nelson Mandela Place, near Glasgow's St George's Tron Church, after planning permission was granted earlier this year.

Although the shrouded figure is fairly anonymous, the wounds in the feet signal it is meant to be Jesus. 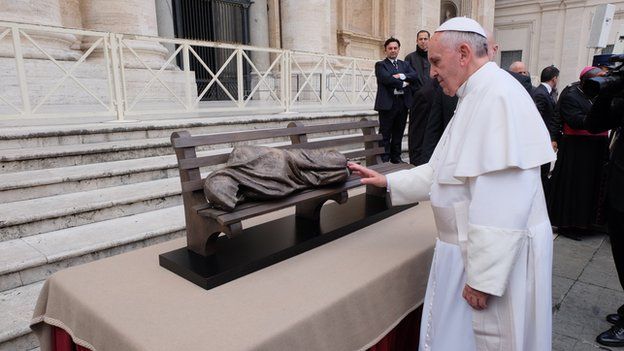 Glasgow priest Father Willy Slavin helped bring the sculpture to Scotland. He was contacted by Mr Schmalz in 2015, and took the idea to the Glasgow Churches Together association.

The cost of the project was £25,000, with money raised through local churches and pro bono work.

Christian sculptor Timothy Schmalz was inspired when he saw a homeless person on a bench in Toronto.

He named the statue Matthew 25, in reference to a quote from that gospel - "Truly I tell you, whatever you did for one of the least of these brothers and sisters of mine, you did for me."

Castings of the statue are placed near churches around the world, including in Madrid, Singapore and the Vatican.

A smaller version of the statue has been blessed by the Pope.

The first churches Mr Schmalz offered his statue to refused to display it. Others see the bench as controversial because it explicitly depicts Jesus as homeless.

Permission to install the UK's first version of the statue on a pavement outside a Westminster church was rejected by the council there in 2016.

'It could be any one of us' 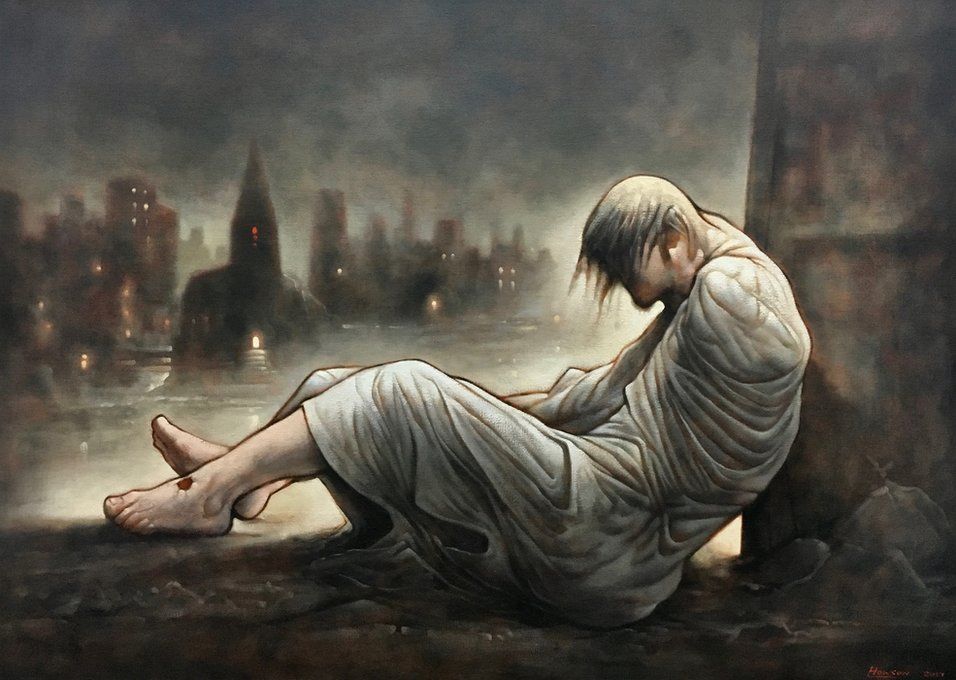 Scottish artist Peter Howson, who was awarded an OBE in 2009, painted a canvas interpreting Jesus as homeless man when he first heard about the efforts to bring Mr Schmalz's work to Glasgow.

Mr Howson said he hoped his painting, Homeless Jesus 2017 , would "aid in awareness whilst highlighting the plight of the homeless, and homelessness issue".

"The sculpture is extremely powerful and its message is universal" he said about Mr Schmalz's work.

The Christ figure in Mr Howson's painting, as in the statue, is only known to be Jesus through the wounds on his feet.

"I wanted to ensure that his face remained anonymous to highlight that this figure (although Jesus) could, in fact, be any one of us, at any given time," he said.

Mr Howson, who has struggled with addiction in the past, created many paintings of Glasgow's homeless population during the early years of his career.

He converted to Christianity about 20 years ago, and since many of his works have depicted biblical scenes.

The painting of homeless Jesus took him six weeks to complete.

About the process, he said: "It moved me in a way I wasn't expecting and I was drawn to the lonely isolation and helpless situation of the figure depicted."

After being displayed at the same church as the statue, Mr Howson's painting will tour across Scotland at events that "promote and highlight the plight of homelessness".

"I want people to look and think and understand its message. The Bronze [sculpture] speaks volumes. I hope my canvas will too" he said.